Brief History of Ghanaian Radio
& the Culture of Literary Broadcasts

Radio is popular in the West African nation of Ghana and an evident part of everyday life throughout the country. According to the National Communications Authority, there are 471 authorised FM stations of which thirty-one are publically owned, 340 are privately owned and operated through commercial profit, seventy-four are not-for-profit stations owned by the communities they serve, twenty-one are owned by educational institutions and termed “campus radio stations,” and five belong to foreign broadcasters such as Radio France Internationale (RFI) and Voice of America (VOA) who transmit programmes into Ghana (NCA website). The origins of Ghanaian radio can be traced back to 1935 when Station ZOY—named by adaptation of its call sign ZD4AA (This Issue 164)—began broadcasting. The station’s founding purpose was to relay programmes produced by the British Broadcasting Corporation’s Overseas Service, but in time it would develop locally originated content and become independent of British broadcasting policy and personnel as Ghana gained its independence.  This essay will provide a brief overview of the history of radio broadcasting in Ghana in order to contextualise the creative writing, memoirs, conversations, and essays that appear in this issue of Obsidian. As with this issue and the additional digital content, the essay will pay particular attention to literary programmes within Ghana’s broadcast history and will focus on the late colonial and early independence decades—an era in which the culture of literary broadcasts was truly established and made its greatest social impact. Finally, consideration will be given to the concern voiced by a number of our contributors that the tradition of broadcasting literature on radio may be lost.

The memoir of early broadcaster Ben Gadzekpo (44.2 Digital) and the essays of Audrey Gadzekpo (This Issue 164) and Sarah Akrofi- Quarcoo (This Issue 182) narrate aspects of the establishment of Station ZOY and its first public broadcast on July 31, 1935. B. Gadzekpo,
who joined the broadcasting service as a vernacular announcer in 1943, describes the scene outside Accra’s West End Cinema Palladium. There, the gathered crowds heard gramophone records playing over loudspeakers that were wired directly to a small bungalow that served as the first broadcasting house (BH-1). “At exactly 5:45 p.m., 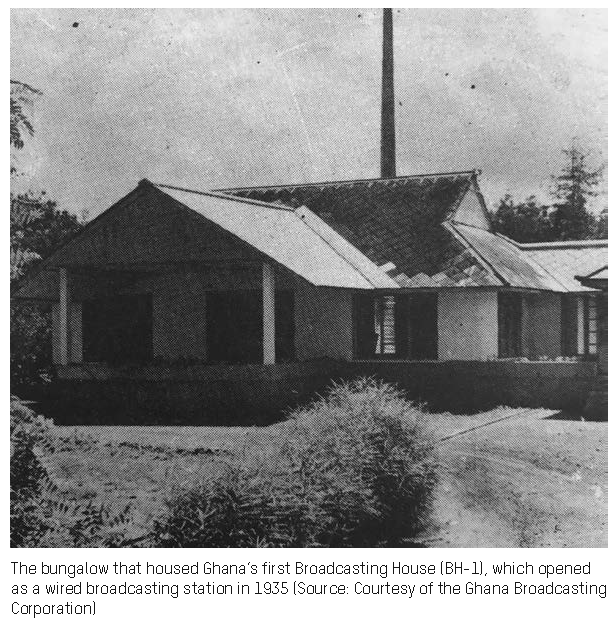 the music stopped,” narrates B. Gadzekpo. “The silence that pervaded
the atmosphere after the deafening music was complete…. People
wondered what would be the sequel.” Next came the British national
anthem and two speeches. The first was by the governor of colonial
Ghana (known as the Gold Coast), Sir Arnold Wienholt Hodson, who
spoke from the studio in BH-1 about the wonders of radio and how it
would enable Ghanaian listeners to hear arts performances from Europe.
As though to prove what radio was capable of, the second speech
came live from London where Secretary of State for the Colonies Sir
Malcolm MacDonald spoke about the “pleasure and interest” that radio
would bring to its listeners. Evidently as convinced as Hodson that
the people of colonial Ghana needed even greater interaction with the
colonisers and the world from which they came, MacDonald went on to
proclaim that radio would enable listeners “to keep in closer and more
immediate touch with what is going on generally in this country [Britain]
and elsewhere in the world.” B. Gadzekpo recalls that when the
speeches ended, the crowd voiced its excitement, with individuals asking
for loudspeakers to be mounted in their communities. Finally, as
the BBC World News began, the “amazement” of Ghana’s first radio
audience “knew no bounds”.

To read more from Obsidian 44.2, please link to our Subscribe page

Any cookies that may not be particularly necessary for the website to function and is used specifically to collect user personal data via analytics, ads, other embedded contents are termed as non-necessary cookies. It is mandatory to procure user consent prior to running these cookies on your website.