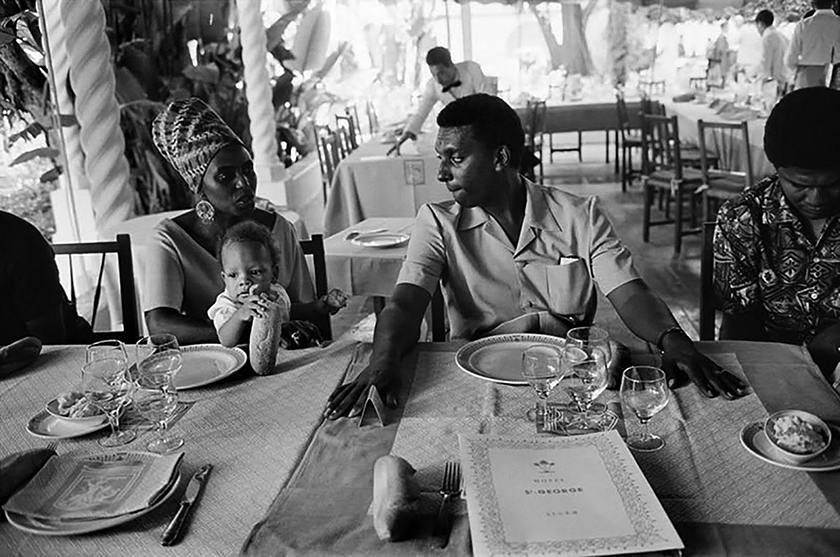 Histories and gestures of revolutionary solidarity helped give rise to the
1969 Pan-African Cultural Festival in Algeria. The influence of Marxism,
Mao Zedong’s views on art and revolutionary culture, and Afro-Asian
solidarities forged in 1955 at the Bandung Conference in Indonesia influenced
the revolutionary art and transnational organizing of many of the festival’s participants. Algeria, as a poetic and political “Mecca,” was the ideal revolutionary space and global stage for the festival, where music legends like Miriam Makeba, Nina Simone, Marion Williams, Archie Shepp, and Dave Burrell broadcast Black power, artistic excellence, and political solidarity around the world. References by participants to a sense of “homecoming” to the “soil” of Africa in conjunction with their somatic descriptions of the affective immediacy of the festival’s street spectacles and live performances stand in stark contrast to the colonizing spectacle and earthly detachment of the moon landing, which took place on the first day of the festival and aimed to deflect from America’s imperial horrors in Vietnam and racial terror at home.

The Pan-African Cultural Festival in Algeria served as a launching pad for international solidarity and a generator of radical action and art, as festival participants journeyed from Algeria to other Global South revolutionary spatialities, like North Korea, and produced art inspired by the cultures, themes, and sounds on display at the festival. Radical women who participated in the festival were essential producers of political space, new bodies, and revolutionary motherhood. New spatialities of artistic and political solidarities emerged in the literature, music, and Black institutions created by participants when they returned home. The spatialized memories of festival attendees reveal how the festival’s subversion of the white “eye,” transcultural street spectacles, and reclamation of African “territory” and “soil” as “home” stood as revolutionary and embodied alternatives to the imperial spatialities of the day: the colonized moonscape, the warscapes in Asia, and the occupied territories in the Middle East.Long before Algeria’s 1969 festival, Malcolm X, James Baldwin, Amiri Baraka, and many other artists and activists saw connections between France’s colonial violence in Algeria and America’s subjugation of its colony within a nation. Freedom fighters like Nelson Mandela, Mário de Andrade, Amílcar Cabral, Mário Soares, and Che Guevara had traveled to Algeria for inspiration, protection, and training. Malcolm X visited the Casbah in Algiers, and Dr. Martin Luther King, Jr., conversed with Premier Ahmed Ben Bella of the new Algerian Republic in 1962 to discuss racial injustice and the “efficacy of nonviolence”—in addition to the Cuban crisis, the Montgomery bus protests, the 1960 sit-ins, Freedom Rides, the Albany Movement in Georgia, and protests in Oxford, Mississippi (King 12). As Dr. King recounts,

All through our talks he repeated or inferred, “We are brothers.” For Ben Bella, it was unmistakably clear that there is a close relationship between colonialism and segregation. He perceived that both are immoral systems aimed at the degradation of human personality. The battle of the Algerians against colonialism and the battle of the Negro against segregation is a common struggle. (12)

Much of the groundwork and architecture of the political solidarities on display at the 1969 Pan-African Cultural Festival had been imagined and created by civil-rights leaders, artists, and activists many years before the festival took place.

To read more from Obsidian, please link to our Subscribe page