Bettina Judd is an interdisciplinary writer, artist, and performer. She is an alumna of Spelman College and The University of Maryland, College Park where she earned her PhD in Women’s Studies with a focus on Black feminist thought and creative production. Most recently, her collection of poems titled Patient., released in 2014, won the Black Lawrence Press Hudson Book Prize.

The Speaking in Tongues Experiment 2.0 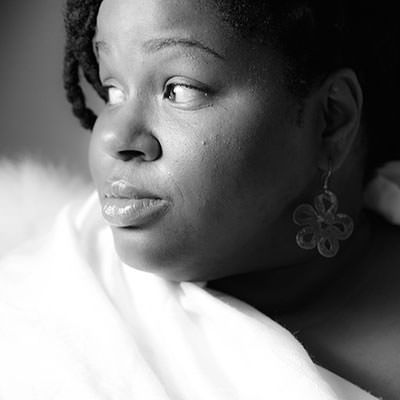 I grew up in a world of sound and silence. My mother who was classically trained would practice her soprano solos in the car on the way to church, on the way back from school and work, between various errands, every ride. She would sit me in the passenger seat, strap me in, and we would be off in the safe space of the car. I would sing with her, unaware that this was her practice time. Yet, she would indulge me. It became our practice time, our indulgence, and later when she married, our way of breaking the silence we endured in a tense and violent home. I learned that song, its breaking of silence, the moving of the breath and vibrations was an important element of my self care. To fill up the void of sound I would crack it with my own song. I sing at work, at home, quite loudly, no matter if the neighbors will hear, and of course in my car. I practice this care even now. But it is in childhood that I began to enjoy the feeling of sound in my body—unable to distinguish the feeling itself from “hearing” it. When silence was mandated in the house, I took to poetry. It was an extension of the letters my mother and I would write to each other. The poems were mine alone, my secrets spoken. I liked the musicality of poetry, the way that it could be captured on the page, ready for me to revisit when I read them aloud. These were my words, and my own internal rhythm, my own attention to breath. Another silence was breaking. These videos are an experiment in the full sensory experience of creative practice between silence and sound. The individual videos have distinct projects to which they belong, but they connect in the thread of experimentation, being the subject and practitioner of experiment, and the play between sound and silence/silencing. Influenced by Black feminist work that challenges the boundaries of recognized and acknowledges knowledge production, these videos take up the many ways in which Black women speak and the creative, polyglossal modes by which our speech is heard and our bodies/of work, read. What does this mean for women of color whose bodies and voices are considered so unintelligible? Whom are consistently and brutally misread? One option is silence, but such an option is equal to death. Another, as suggested by Gloria Anzaldúa in This Bridge Called My Back, and Mae Henderson in Speaking in Tongues & Dancing Diaspora is to continue to speak in the many ways in which we have spoken, and embrace the many languages unintelligible by forces that would remain outside of reach (i.e. “this isn’t accessible to a larger audience,” “you should consider footnoting this ethnic reference.”) as the alternative is silence/silencing. This also means challenging eurocentric and androcentric notions of valuable and recognizable knowledge production. For example, in Sister Outsider, Audre Lorde reminds us that the “irrational” knowledge of the erotic is a powerful force within women. The erotic is defined as a way of knowing that is embodied, intellectual and spiritual, that has been demonized by patriarchal forces that privilege “rational” thought over emotion and masculinity over femininity. There was much information packed in the car sessions with my mother. These sessions were our opportunities to speak, the car our kitchen table. I continue to practice these many ways of speaking and hearing. I continue to labor to decenter logics that would render Black women’s speech into silence and to amplify silence for its potent message.

Bettina Judd is an interdisciplinary writer, artist, and performer. She is an alumna of Spelman College and The University of Maryland, College Park where she earned her PhD in Women’s Studies with a focus on Black feminist thought and creative production. She has received fellowships from the Five Colleges, The Vermont Studio Center, and the University of Maryland. She is a Cave Canem Fellow and has been nominated for the Pushcart Prize in poetry. Her poems have appeared in Torch, Mythium, Meridians and other journals and anthologies. Most recently, her collection of poems titled Patient., released in 2014, won the Black Lawrence Press Hudson Book Prize. More information about her work can be found at her website: www.bettinajudd.com.