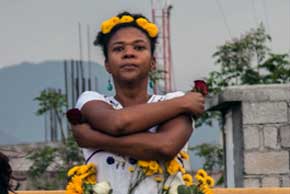 What if one was given the chance to arrive, for the first time, to a place called “home” imagined, designed, and conceived entirely as that which one envisioned it to be?

In the opening pages of Manifesta Journal #17: Future(s) of Cohabitation, the editors write:

If the term Afrofuturism has recently been criticized for perpetuating the prefix “Afro”, it has also produced an inspiring platform that allows Black subjectivity to re-imagine and re-define itself through the prism of fantasy and the transcendental as well as through technology, alternative identities, realities and histories that engage the past, rethink the present and anticipate the future. (Petrešin-Bachelez, Bobin, and Silva 7).

The Alien Project began and continues to propel me forward in my desire to create a vision for an alternative future where possibility moves me into light instead of darkness. Throughout the development process, I studied Malick Sidibé’s iconic photography of Bamako’s youth culture at the rise of Mali’s independence in the 1960s and was deeply inspired by these incredibly dynamic compositions. These photographs, alongside films including Djibril Diop Mambéty’s Touki Bouki (1973), Mortu Nega (Those Whom Death Refused) by Flora Gomes (1988) and Julie Dash’s Daughters of the Dust (1991), gave me a foundation to explore the question of arrival to a desired space of possibility.

This is the first chapter in what I hope to build into a series. Here I am introducing an alien from the future who arrives to a planet from which she was exiled in order to find her soul kin and ‘save’ the earth from its own social and ecological destruction. Obviously, this is a very familiar sci-fi trope which I was excited to explore from a feminist perspective. I was also motivated by the notion of creating a highly conceptual contemporary performance piece that was visually accented with a space-age 1960s aesthetic.

As the Milwaukee lakeshore opened its broad and sensual silence of snow falling upon me, I thought, what if this is the last winter?

Having begun my creative trajectory as an actor, I was interested in working across different modes of performance in order to explore the various stages of the story. This story presents three modes of performance: stylized acting, improvisational movement and performance action as protest. I worked with the cinematographer, Darren Alexander Cole, to visually compose each scene with a distinct visual style in order to examine the notion of discovering your home for the very first time and to capture the contrasts between the energy of spiritual ecstasy, social resistance and the notion of rebuilding in the face of failure and abandonment.

In essence, the aliens find that they can only refuel from the exhaustive nature of their mission when they meet at the railroad tracks. As a Midwesterner, I was feeling this need to propel myself forward and imagine lives thriving in these abandoned industrial spaces. And these moments on the railroad are a tribute to the work of men, women, and children whose labor was exploited to build the economic infrastructure of the United States. As aliens, the two characters have a periodic ritual which they can do only when united, as a means of both recharging and seeking refuge. This is, of course, also rooted in the tradition of the Blues, the legacy of the Underground Railroad as well as my interest in the intersection of the diverse histories that have defined the railroads and industry as we know it in the United States and as these railroads symbolically speak to many migrant histories across the Americas and beyond.

In the final scene, I was interested in documenting a live act of performance as protest that could also inevitably take on cinematic possibilities. What happens when we become stateless in the place we once defined as home? Where do ritual, performance and protest intersect? I was interested in capturing desire and longing as a personal and political act of resistance while also examining my relationship to the environment and to the question of property in the trajectory of US history. I was thinking mainly about Fluxus artists and also the question of statelessness and migration which persistently haunts me as I continue learning of these shared, yet diverse, narratives which seem to thread themselves throughout the African Diaspora.

When I created the piece, I was thinking mainly of Black Diaspora communities in the US who are consistently impacted by deportation and displacement and yet remain invisible in mainstream media coverage. At the same time, this guarantee of citizenship signifying equal access to human rights still remains tenuous (at best) to me as a US-born Black citizen. As an artist who grew up understanding that the works of Audre Lorde and Marlon T. Riggs have paved my own creative path, I also keep returning to desire and the notion of presence as absence. I wanted to mark this space in front of the Homeland Security Office in some temporal way which led me to score a very quick set of physical tasks for this scene. We filmed these activities “on the fly” in order to engage in a focused act of ephemeral protest but quickly enough to not have to be in danger of actual police intervention.

And finally, I am truly indebted to Shell Benjamin (performer) and Darren Alexander Cole (cinematographer) who worked steadfastly to complete the filming for this piece in a very short amount of time. Shell is a professional dancer and also Assistant Professor of Theatre and Dance Director at Shorter University in Rome, Georgia. Darren is a filmmaker and currently finishing his MFA in Film/Video at Massachusetts College of Art and Design in Boston. These collaborations are also, for me, significant moments that form part of a larger movement to allow video art the space to breathe into unexpected places of accessibility and community while challenging audiences to reimagine our collective futures.

Catron Booker is a video and performance artist originally from Chicago, IL and currently living in Oaxaca, Mexico. Her works have previously screened at Anthology Film Archives (NYC), Seattle Local Sightings Film Fest and Cologne International Videoart Festival. She holds an MFA in Acting from UCLA and an MFA in Film/Video from the University of Wisconsin, Milwaukee.

Quote: “I turned to filming in order to explore aspects of performance that I felt were left unanswered in my life as an actor. I was tired of asking permission in terms of the world of an actor who is constantly seeking a ‘role’ and also eager to really find a way to formally assert my own role in the world as one that is a persistent pursuit of self-definition. Now I understand that I am also seeking a conceptual bridge between live performance and video art. And at the core, I am interested in using the moving image to open up possibilities for more expansive conceptions of the past, present and future.”
– VIPNew Media Fest