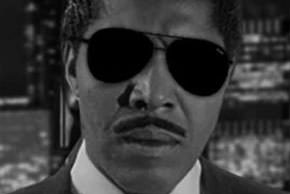 Peter Archanjo (°1970, Simoes Filho, Brazil) makes films, photos, films and mixed media artworks. By examining the ambiguity and origination via retakes and variations, Archanjo uses a visual vocabulary that addresses many different social and political issues. The work incorporates time as well as space – a fictional and experiential universe that only emerges bit by bit.

His films are an investigation of concepts such as authenticity and objectivity by using an encyclopaedic approach and quasi-scientific precision and by referencing documentaries, ‘fact-fiction’ and popular scientific equivalents. With Plato’s allegory of the cave in mind, he creates work through labour-intensive processes which can be seen explicitly as a personal exorcism ritual. They are inspired by a nineteenth-century tradition of works, in which an ideal of ‘Fulfilled Absence’ was seen as the pinnacle.

His works never shows the complete structure. This results in the fact that the artist can easily imagine an own interpretation without being hindered by the historical reality. By rejecting an objective truth and global cultural narratives, he creates intense personal moments masterfully created by means of rules and omissions, acceptance and refusal, luring the viewer round and round in circles.

His works doesn’t reference recognisable form. The results are deconstructed to the extent that meaning is shifted and possible interpretation becomes multifaceted. By applying abstraction, he reflects on the closely related subjects of archive and memory. This often results in an examination of both the human need for ‘conclusive’ stories and the question whether anecdotes ‘fictionalise’ history.

His works are often classified as part of the new romantic movement because of the desire for the local in the unfolding globalized world. However, this reference is not intentional, as this kind of art is part of the collective memory. By using an ever-growing archive of found documents to create autonomous artworks, he creates with daily, recognizable elements, an unprecedented situation in which the viewer is confronted with the conditioning of his own perception and has to reconsider his biased position.

His works are an investigation into representations of (seemingly) concrete ages and situations as well as depictions and ideas that can only be realized in film. By contesting the division between the realm of memory and the realm of experience, he tries to increase the dynamic between audience and author by objectifying emotions and investigating the duality that develops through different interpretations.

His works isolate the movements of humans and/or objects. By doing so, new sequences are created which reveal an inseparable relationship between motion and sound. By questioning the concept of movement, he tries to create works in which the actual event still has to take place or just has ended: moments evocative of atmosphere and suspense that are not part of a narrative thread. The drama unfolds elsewhere while the build-up of tension is frozen to become the memory of an event that will never take place.

His works are given improper functions: significations are inversed and form and content merge. Shapes are dissociated from their original meaning, by which the system in which they normally function is exposed. Initially unambiguous meanings are shattered and disseminate endlessly. By merging several seemingly incompatible worlds into a new universe, he finds that movement reveals an inherent awkwardness, a humour that echoes our own vulnerabilities. The artist also considers movement as a metaphor for the ever-seeking man who experiences a continuous loss.

His works bear strong political references. The possibility or the dream of the annulment of a (historically or socially) fixed identity is a constant focal point. By referencing romanticism, grand-guignolesque black humour and symbolism, he absorbs the tradition of remembrance art into daily practice. This personal follow-up and revival of a past tradition is important as an act of meditation.

His work urge us to renegotiate film as being part of a reactive or – at times – autistic medium, commenting on oppressing themes in our contemporary society. By putting the viewer on the wrong track, he makes work that deals with the documentation of events and the question of how they can be presented. The work tries to express this with the help of physics and technology, but not by telling a story or creating a metaphor.

His collected, altered and own works are being confronted as aesthetically resilient, thematically interrelated material for memory and projection. The possible seems true and the truth exists, but it has many faces, as Hanna Arendt cites from Franz Kafka. Peter Archanjo currently lives and works in Chicago.