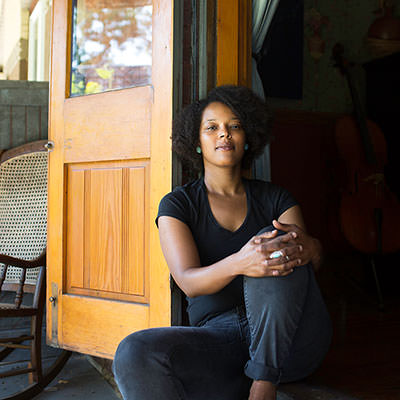 I grapple with issues of my time and times gone, particularly social injustice, migration, and marginalization. I explore these issues from a personal perspective in poetry, and I seek to contribute to a larger narrative and soundtrack of hope and resistance in the face of displacement and discrimination.

I write personal and cultural histories concentrated with music, shaped by forms such as blues, jazz, hip hop, and ragtime. I strive for a musicianship of poetry on the page and in performance, marrying words with delivery to present my voice as an instrument in the band that can play along the continuum of poetry and song. Performing a poem is an exercise in resuscitating my “mouth on paper” (Jayne Cortez), of re-inhabiting, exposing, and sharing with others what was initially a private moment of inspiration and creation.

Places with divergent pasts and presents create a tableau for my work, including the Germantown section of Philadelphia where I was born and now reside, and the Montgomery County towns of Penllyn and Ambler where I grew up and my mother’s family has lived for more than a hundred years. Ambler was once known as the “asbestos capital of the world” and is home to BoRit, an EPA’s Superfund site containing hazardous waste. My great-grandmother’s house on West Maple Street, built in the 1930s, was recently an EPA office on the edge of a two-acre, twenty-five foot pile of asbestos remnants. The story of black Ambler and black Germantown, stories of environmental racism and neglect, are largely untold. I write to unearth these hidden motherlands.

I spent my teens and twenties searching for relatives among unmarked graves; I met my birth father when I was thirty, on my wedding day, after years of searching. I have lost family elders and their stories to death and disease. Poetry is a genealogical project I have undertaken out of urgency, passion, curiosity, justice, and also love and legacy. When my son was born six years ago, his father could trace his family’s Garifuna ancestry to the island of St. Vincent in the 16th century. I could only go back to 1913, the year of my great-grandmother’s birth. With the last six years of Thelonious’ life as a catalyst, I can now trace my maternal lineage to the mid-1850s. But I struggle with the erasure and obstacles slavery presents to my research. In poetry, I locate a sense of self and pride embedded in the scant details of my ancestor’s lives. In the absence of memory, witness, and record, poetry is my portrait of a black family. Though diasporic and diffuse, scattered and grudge-ridden, the story of our family’s survival in the face of past destruction is a blueprint I’ll leave behind.

These tracks were all recorded at the Miquon School in Conshohocken, PA, in January 2016 and mixed by Mike Batchelor of Kettle Pot Tracks. My partner Mark Palacio plays double bass on all three tracks. Six-year-old Thelonious plays unexpected percussion at the end of “Gangsta Birth.”

The pieces form an audio triptych, a portrait of The Mother. “Africa SOS” sounds the alarm for endangered space and culture in the war chant-style of Cortez and Fela Kuti. “Cycle” is a call for rescue from longstanding patterns of self-destruction. “Gangsta Birth” is an ecstatic homebirth/rebirth story.

These poem-songs are also part of larger audio project-in-progress with the working title Pirate Jenny’s Conspiracy. I first encountered the character of Pirate Jenny in Nina Simone’s “Pirate Jenny Live 1964” recording, her cover of Bertolt Brecht’s lyrics from The Threepenny Opera. Nina made Jenny Black and militant. My Pirate Jenny, a poet and singer and explorer, is born out of the line, “You couldn’t ever guess to who you’re talkin’.” It reminded me of the secret wisdom and the power of the folks classified and deemed “the help.” It looks like Jenny disappears or imagines disappearing with the ship The Black Freighter at the end of the song, but for me, she still drifts along the seas on an odyssey of song and dance through the African diaspora. These tunes are part of her soundtrack over which she breaks ancestral cycles of oppression, trauma, and loss. She reclaims her voice, her capacity to love, her story. She finds her people. She sings, shouts out, raises up. She fights back with the tools she’s made. She loves all kinds of ways. She dares to do more than survive. She breaks through/into a new world of joy.

Yolanda Wisher is a multidisciplinary poet and educator. Currently the 3rd Poet Laureate of the City of Philadelphia, Wisher is a Hedgebrook Writer-in-Residence (2016), Pew Fellow (2015), Catalyst Initiative Grantee (2015), Leeway Art & Change Grantee (2008), Cave Canem Fellow (1999-2000), and the first Montgomery County Pennsylvania Poet Laureate (1999). Born in Philadelphia and raised in North Wales, Pennsylvania, Wisher attended Lafayette College, where she received a B.A. in English/Black Studies. Wisher later earned an M.A. in English/Creative Writing-Poetry from Temple University. Wisher is the author of Monk Eats an Afro (Hanging Loose Press, 2014) and the co-editor of Peace is a Haiku Song (City of Philadelphia Mural Arts Program, 2013). Her work has been featured in Fence, GOOD Magazine, Harriet: The Blog, MELUS, Ploughshares, The Sun Ra Mixtape Vol. 1, and in the anthologies Gathering Ground, Gravyland, Lavanderia, Stand Our Ground, and The Ringing Ear. As an English teacher at Germantown Friends School, Wisher founded and directed the Germantown Poetry Festival (2006-2010). She also served as the Director of Art Education for the City of Philadelphia Mural Arts Program (2010-2015). Wisher is a Founding Cultural Agent and the Chief Rhapsodist of Wherewithal for the U.S. Department of Arts and Culture.