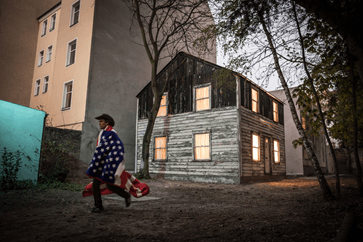 American artist Ryan Mendoza in from of the exhibit he made in Berlin of the Rosa Parks house. Image via Gordon Waters, New York Times.

As reported by Yonette Joseph of The New York Times in her September 2nd article, Rosa Parks’ house is being shipped back from Berlin, where it had been restored. In 2008, during the financial crisis shaking America at the time, Ms. Rhea McCauley paid $500 to remove the house from the demolition list. Ms. McCauley is the seventy-year-old niece of Rosa Parks, and wanted to preserve her aunt’s home. She met artist Ryan Mendoza through mutual friends, and in 2016, the artist shipped the dismantled home in two containers to his home in Germany where he began to restore the historical home in his backyard.

Ms. McCauley is the seventy-year-old niece of Rosa Parks, and wanted to preserve her aunt’s home. She met artist Ryan Mendoza through mutual friends, and in 2016, the artist shipped the dismantled home in two containers to his home in Germany where he began to restore the historical home in his backyard.

“I never wanted to rebuild it in my backyard,” Mendoza told the Times, communicating by phone from Berlin,

“But I wanted to protect it.” Now, Mendoza feels that it is time for the house to return to America, as an example of how people should treat each other with dignity. The Times reports that several people like the German vice chancellor, Sigmar Gabriel, and the boxing Champion, George Foreman, have come to see the home.

The question that arose after Mendoza decided he wanted to ship it back to America: where will it go? Mendoza has reached out to, and been reached out to. The Nash foundation pledged $45,ooo for the house’s trip, and Mr. Nash’s dream is “…to have it at the new African-American museum in D.C.”

However, the Smithsonian (which controls the National Museum of African American History and Culture) has stated through their chief spokeswoman, Linda St. Thomas, that Rosa Parks is already “well represented,” making it unlikely that the Smithsonian will take the house. Though Brown University seems interested in taking the house for the Center for the Study of Slavery and Justice to use as an exhibition, and Juanita Moore, president of the Wright Museum, is arguing that the home belongs in Detroit as it represents her life in Detroit.

But, some in Germany like Nikolaus Bernau, an art and architectural critic and historian, argue that it should be placed in the Humboldt Forum (a huge cultural and museum project in Berlin) as Bernau states that no one in America really wanted to take the historical home. He believes it should stay in Europe as “one of the only connections Berlin and Europe would have to Rosa Parks.”

Mendoza doesn’t seem to know exactly where the home should go, but he says “I’ve been put in the position of taking care of a national monument… I believe it should be put behind bulletproof glass.”

He has finished restoring the exterior and is currently working on the interior, using the original floors, doors, and stairs that Rosa Parks herself would have touched.

As of October 19, the location decided upon was Providence, Rhode Island. According to the Press Herald, the home will be moved early 2018, reassembled, and displayed March through May.